Just this side of heaven is a place called Rainbow Bridge.
When an animal dies that has been especially close to someone here, that pet goes to Rainbow Bridge. There are meadows and hills for all of our special friends so they can run and play together. There is plenty of food, water and sunshine, and our friends are warm and comfortable.

All the animals who had been ill and old are restored to health and vigor. Those who were hurt or maimed are made whole and strong again, just as we remember them in our dreams of days and times gone by. The animals are happy and content, except for one small thing; they each miss someone very special to them, who had to be left behind.
They all run and play together, but the day comes when one suddenly stops and looks into the distance. His bright eyes are intent. His eager body quivers. Suddenly he begins to run from the group, flying over the green grass, his legs carrying him faster and faster.

You have been spotted, and when you and your special friend finally meet, you cling together in joyous reunion, never to be parted again. The happy kisses rain upon your face; your hands again caress the beloved head, and you look once more into the trusting eyes of your pet, so long gone from your life but never absent from your heart.

Then you cross Rainbow Bridge together....

"Tazzy"  Rip April 2, 2008
Lost too Young, too Soon, too Tragically. Too Painful to put into words.
Few are privileged to be graced with a very special soul, but we were lucky to have been sent an Angel in the form of a Frenchie who stole our hearts from the time we saw her at 7 weeks old. We brought her home 2 weeks later and the rest is History. That special Frenchie was Tazzy, who we called our froggie queen, who we called our #1 girl, who we had the joy of sharing our comforters and pillows with every night. With her loss came a painful void in our hearts. A void that will never be filled by another no matter how many more special Frenchies come along, there will always be that void for Tazzy.

So many memories, too many to list. She made us laugh and smile everyday she was with us. She was funny, smart, rambunctious when she wanted to show off and make us laugh. The more we laughed, the more she did her funny antics cause she knew she was making us laugh and have a good time. She was feisty and the ruler of the roost and loved every person she ever met. What an adventurous baby she was, our shadow who we never left home without whether in the car or on the boat she was right there with us.  If you've ever been touched by a special FUR ANGEL like this, consider yourselves lucky. Only with us 3 years, but left us with a lifetime of memories. She died only 4 days after her one and only litter was born. Her 3 kids Chilly, Tyson and Trixie remind us of her every day.  Tazzy's blood runs through their veins and for as long we have Frenchies her blood will remain with us. Her spirit lives on, especially with Chilly who has taken over the ruler of the roost position. As odd as it sounds, it feels like Tazzy was somehow reincarnated in Chilly, she is so much like her mother it really freaks us out sometimes. There will never be another like Tazzy though, it's her physical presence that we need, that we long for so much....
.......... Until we meet again..... rest in peace our precious baby.

"Baby"
!STOLEN! Feb 12, 2006
She was only 16 weeks old.
Sad story, Tragic Ending. I thought I was being nice showing a "nice couple" our babies. We did not have anything to sell, but they just wanted to see the babies. They had never met a Frenchie. Having met them at Pet Smart we thought it would be fine. We thought they were dog lovers, nice couple, but the next day our Baby Girl was stolen. Only left her out of my site 30 minutes while I ran to the store. Nice warmer winter day, I figured she can get some sun and fresh air in our private COUNTRY, secured yard so I left her out WITH another dog (non-frenchie). To my horror, when I returned Baby was gone, my other dog still here. Our neighbor told us same car that was there the day before, was at the house today and Baby was gone. Coincidence? I think not.  The small, expensive breeds attract thieves, I have found out the hard way. Just the other day some Miniature Yorkies were stolen from their breeder. This is not right. This will not happen to us again. We spent $thousands of dollars on Baby, she was AKC Ch Sired and had show potential. She was stolen on the Sabbath day, those who did this will pay the price in the end. What would have been?
For what it's worth I hope you are being spoiled & taken care of. 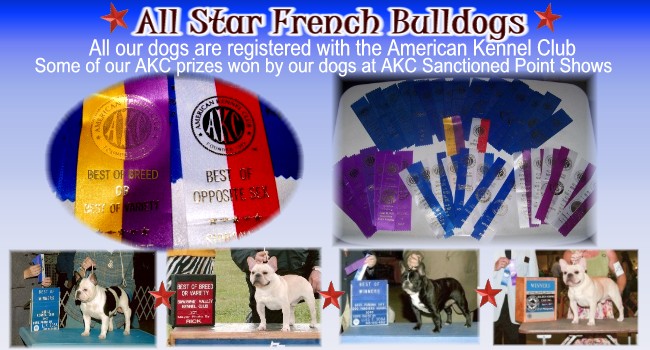